Best, when measured against the rest.

Best, when measured against the rest.

Essential Facts about Asthma and FeNO

Learn about how FeNO works, or jump to Guidelines

Role of nitric oxide (NO) and FeNO in human health

In the late 1980s, scientists discovered that the human body has complex enzymes, called NO synthases, that synthesize nitric oxide (NO), a ubiquitous gas that diffuses and acts locally on cells to mediate physiologic responses.1 In the vasculature, the effect of NO on smooth muscle results in relaxation and vasodilation, while in the airway, NO results in bronchodilation.

NO binds to receptors on smooth muscle called soluble guanylate cyclase, thereby raising intracellular cyclic GMP, which inhibits the entry of calcium into the cell and relaxes the muscle. In 1998, the Nobel Prize in Physiology or Medicine was awarded to 3 researchers for their role in elucidating the mechanisms of action of NO.²

NO was first identified in the breath of humans in 1991.3 NO, produced in the airway mucosa by NO synthases, diffuses into the airway lumen and is exhaled. Although all individuals exhale NO due to physiologic production, in those with asthma, FeNO levels are elevated due to allergic asthmatic inflammation (eg, infiltration of eosinophils).

ATS, NICE, and ERS support the use of FeNO 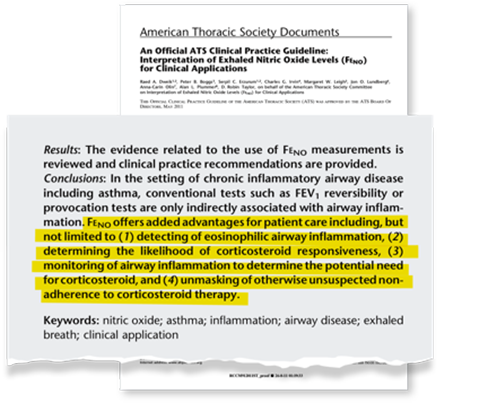 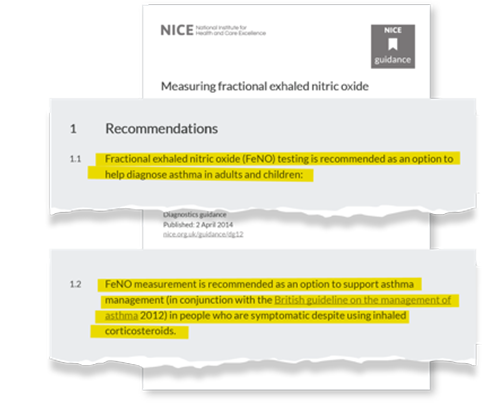 ATS publishes clinical guidelines of great use to practicing clinicians.19